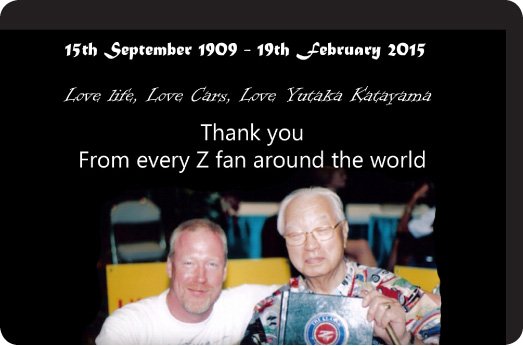 You know well my love for all things Datsun and, in particular the 240Z.

With such a great car (completely biased of course), the people involved in the creation of the vehicle are also revered. Much in the same way that Richard Branson is revered for any Virgin company.

It is no different to the Z – There is, and always will be some argument over who actually designed the car, was it Albrecht von Goertz or a team led by Yoshihiko Matsuo (consensus now is the latter), but there was no doubt as to who was the most influential in getting the right design to the market and then making it successful. Yutaka Katayama, who was sent to the USA to do market research so Nissan could decide how, of if they should export to North America.

This is less to do with the car and more to do with Yutaka Katayama and how he thought differently to everyone else.

If you want to understand Katayama, you have to understand the Japanese expression, “The nail which stands out gets hammered down.” He lived it every day. Part of assimilating into Japanese society means subduing yourself as much as possible, even physically (People dye their hair much darker, very close to black, tired of it attracting attention on trains or in public places, as an example).

Katayama was a rebel. He was a rabble rouser. Katayama was the Nail That Would Not Be Hammered Down. In Japan he met resistance; in America, he created a legacy.

Katayama was given the assignment because building a brand, Datsun (named such so that if it failed, it wouldn’t sour the name Nissan in America and the company could try again later), was a test.

Heading up Datsun wasn’t a promotion; it was exile.

But, it was his ‘Thinking differently’ that gave Datsun such a lead over Toyota, Honda and all the others that followed.
In America,

Datsun was a (very) small fish in a (very) large pond and trying to get car dealers on board with an unknown product from an unknown brand was née on impossible.

At this point most would have reported back that it was ‘too difficult’. But Katayama attacked the issue from another angle, he targeted second hand car dealers, who were only too delighted to be given the opportunity to sell something ‘new’.

This approach, together with an honesty in a sector, where truth was one the options on the option list, separated Katayama, and with it Datsun from all the other car manufacturers in North America.

He also understood, that whilst the selling of the product may end at the ‘purchase’, the selling of the brand starts at that point. He had a handful of engineers that would travel the length and breadth of the country fixing any problems with the cars that arose from his new customers.

The loyalty from his dealers is stuff of legend.

America was full of pickup trucks, but large ones, so Katayama pioneered the small pickup truck.

The second model was the 510 (The Bluebird) targeted at BMW. It was good enough to beat them on the track.
He knew his avatar, and it was Katayama that drove (pun intended) Nissan to develop and release the Datsun 240Z. In indication of his influence profound, Nissans previous sporty models were called “The Fairlady”, named after My Fairlady.

But Katayama knew the market for a sports car was the traditional macho man avatar and having a tough guy driving something called a “Fairlady” might be an obstacle.

He convinced Nissan to use the development name – 240Z.

The success of the Z was credited to ‘foresight’ from the Nissan directors, but such is the Japanese way, no-one stands up to claim credit for themselves.
Although he retired in 1977 he continued to actively promote the Z, as a new car, then as a classic car.

I was extremely fortunate to meet him in Las Vegas in 2000 after attending a Z Car Convention.

Success can be achieved by thinking differently, some people call it homeostasis – our body’s natural desire to keep everything within normal limits.

People around you will try to keep you within normal limits.

So you have two choices, either submit and keep your friends, or resist all urges to conform and change your circle of friends, or in Mr Katayama’s case, your country.